Read picklebet's complete guide on how to play esports Daily Fantasy, from registration to submitting your team and how to select the contests to enter.

Before you can enter a daily fantasy esports contest, you need to register an account. Visit picklebet.com, click on the REGISTER button, and complete the signup process.

All the upcoming and live daily fantasy esports contests are listed on the contest page. You can enter the upcoming contests.

You cannot join a contest once it has gone live.

To see a full list of who can play, check out our FAQ.

You will notice one currency on the platform for fantasy, USD. 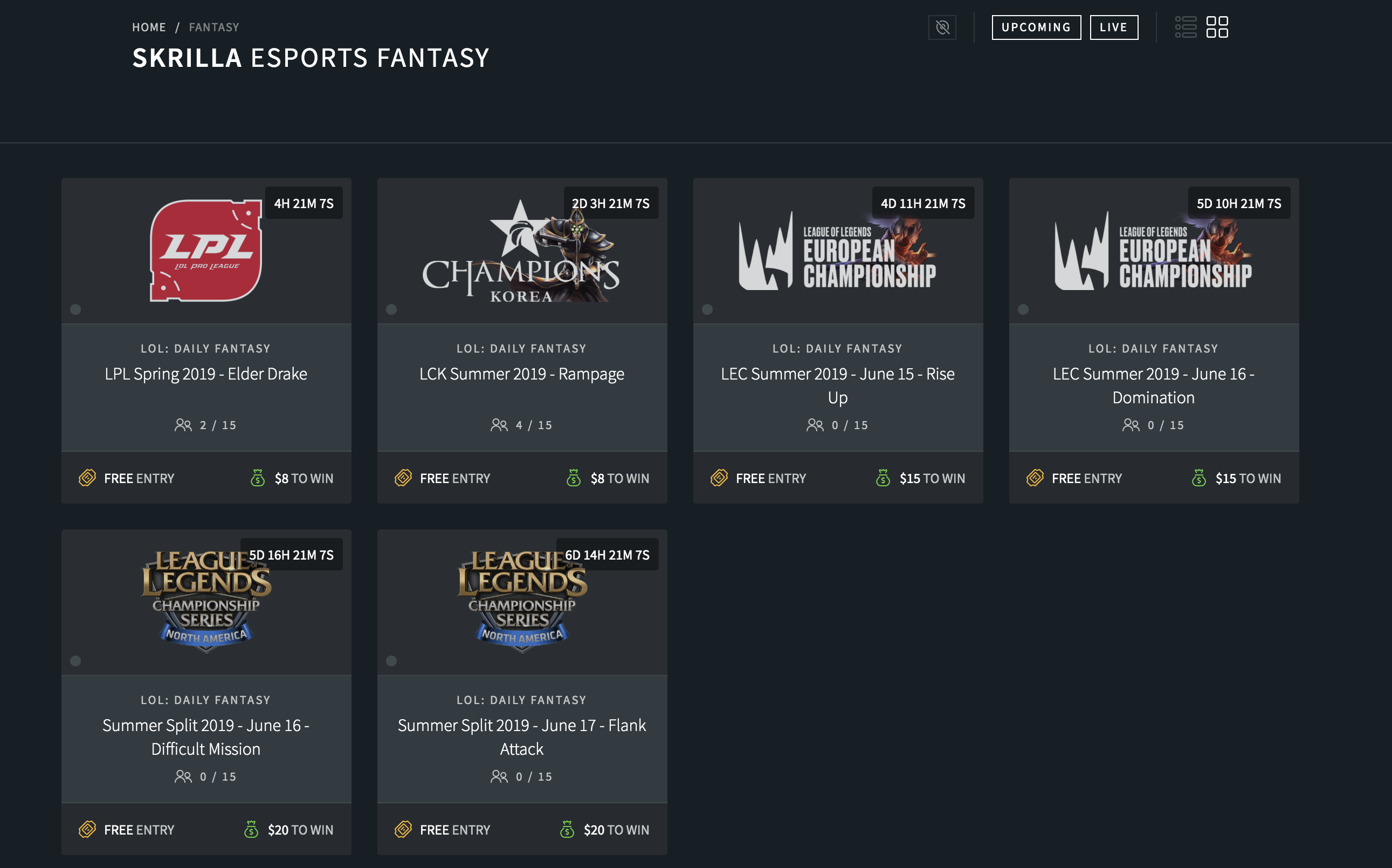 After you click into a contest from the contest page you will be brought to the roster build page for that particular contest.

It is on this page where you build your player roster to enter the daily fantasy esports contest.

Read on for explanation on each section, and instructions on how to build and submit a roster.

Name of the esport and Contest Title

At the top of the roster build page you will see the name of the esport (for example LoL which is short for League of Legends, or CS:GO, which is Counter Strike)

Directly under this is the Contest Title

Entry Fee: This is the cost to enter the contest.

Note: In some contests it will be possible for one user to submit more than one roster. This FAQ will provide more information on this.

Prize Pool: This is the total prize amount allocated to the contest. This will be in USD.

Time Till Start: This is a countdown timer to the contest start time.

At the top right of the roster build page you will see the CONTEST INFO button. This contains important information that relates to the particular contest.

How To Play: This tab has an inserted video which shows you how to enter a daily fantasy esports contest. 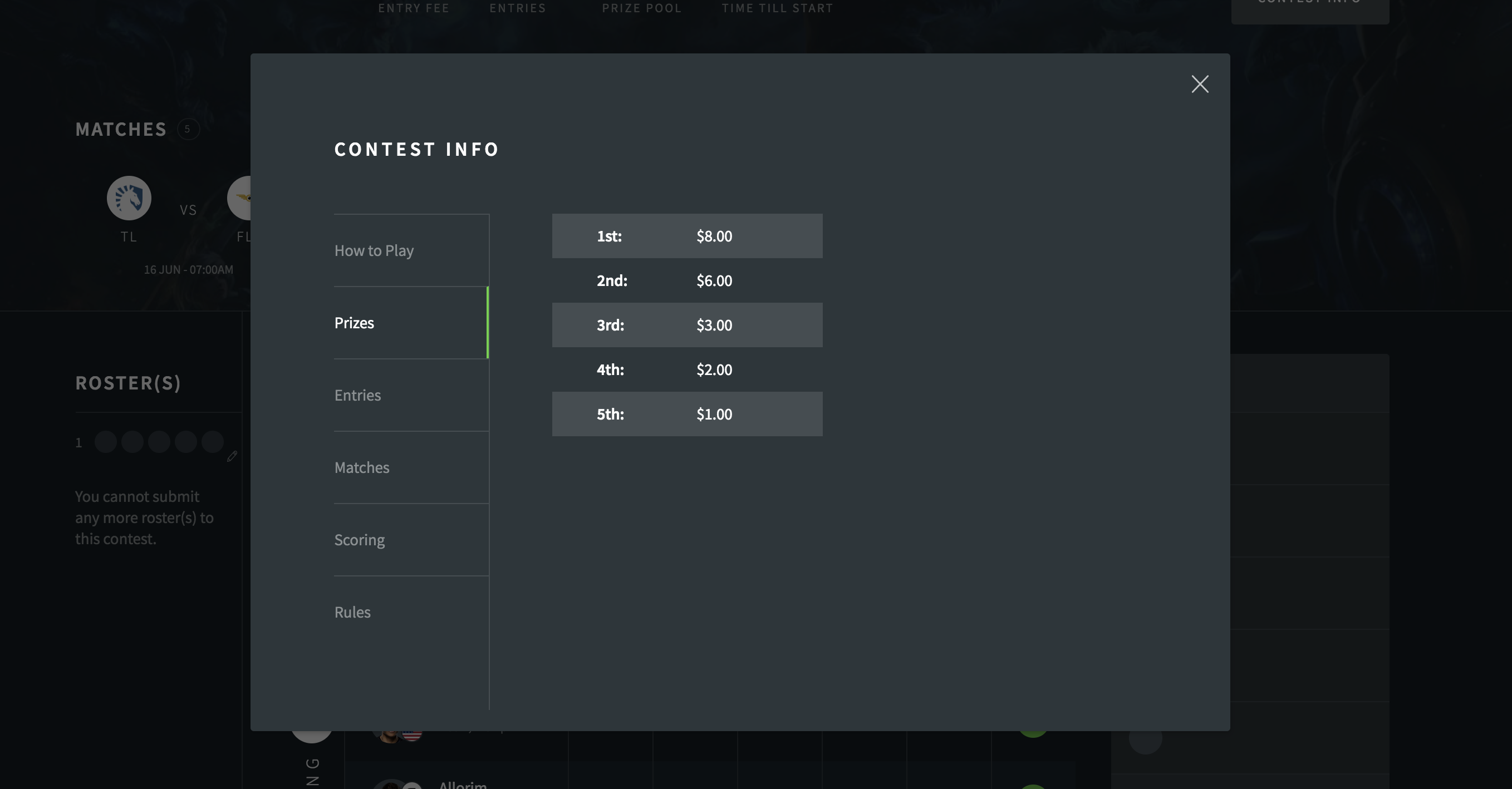 Entries: This tab shows the list of all the users that have submitted a roster to the contest. If a user has submitted more than one roster, the number of rosters submitted will be shown inside ( ) next to the username.

Matches: This tab lists the professional esports matches that the contest is built around. More information on this further down.

Scoring: This tab shows how points are allocated to the esports players. More information on this further down.

Rules: This tab shows the overall rules relating to the contest.

At the middle of the screen, just above the fold you will see a selection of matches, going left to right. These are the professional esports matches which the contest is built around.

At the lower centre of the screen, you will see a list of esports players grouped in the teams they play for as per the matches listed above.

The Main Objective (this is the important part!)

Your task is to pick the best 5 players from the list of players available. This becomes your fantasy roster.

When the first match begins, the contest will start. The players will score points based on what they do in the match. For example if they get a kill they get points, if the die, they lose points.

THE GOAL IS TO SELECT THE PLAYERS WHO YOU THINK WILL SCORE THE HIGHEST POINTS.

As mentioned before, to see how the points are allocated, click on the CONTEST INFO button and select the ‘scoring’ tab.

THE USER WHO HAS THE HIGHEST SCORING ROSTER WILL WIN THE DAILY FANTASY ESPORTS CONTEST!


How to build your roster

Step 1: Start by adding players from the list of players available. To add a player, click on the green + circle next to the player. You have to pick a total of 5 players.

A couple of general rules to note:

In the player selection grid you will see ‘MATCHES’, ‘AVG FP’, ‘FORM’ and ‘SALARY’. This is what they mean:

Matches: This is the total matches the players has played.

Avg FP: This is average fantasy points. This is the average points the player has scored, according to our scoring system across the total matches they have played.

Form: This is the players average fantasy points from the players last four matches. If you compare this against the AVG FP, it can give an indication as to whether the player is playing well or badly!

Salary: This is the amount the player costs to add to your roster. This amount is deducted from your salary cap of 100,000. In general the better the player the higher the cost. The player salary amount is derived from a secret algorithm we have created!

Step 2: Once you have selected your full team roster, you need to choose one player to be your captain. Your captain’s individual points tally will be multiplied by 125%.

This means you want to pick the one player in your roster who you think will score the highest points.

To make a captain selection, click on the player profile picture from within the roster box. You will see a crown appear on the player avatar when you select your captain.

Step 3: Once you have selected your captain, hit the SUBMIT button at the bottom of the roster box. 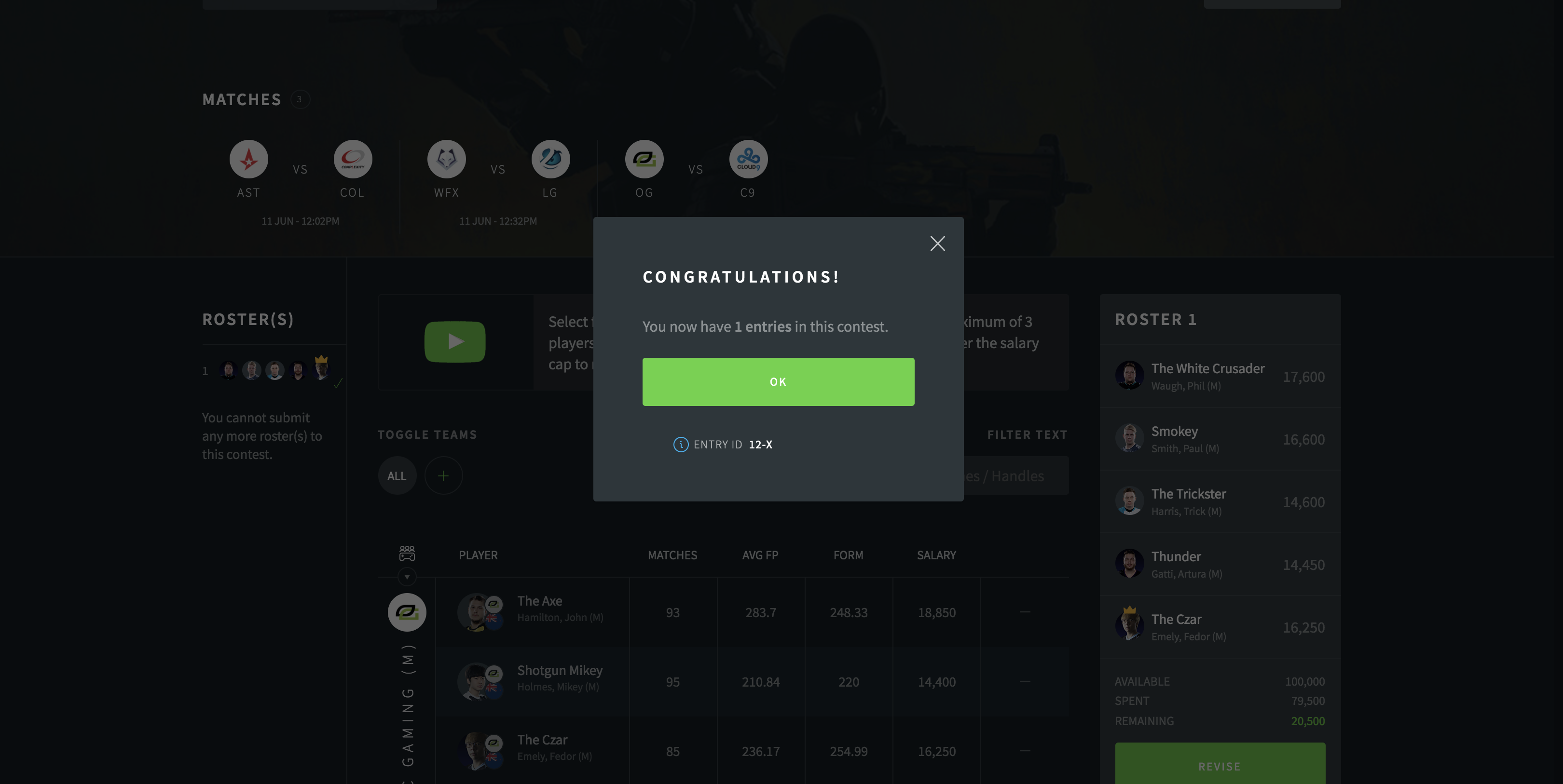 You have now entered a picklebet esports daily fantasy contest!

When the first match starts, the contest will go live. The contest will then go into ‘live view’. Go to the fantasy live view user guide for more information on the live view.