The regular season of the United Masters League has concluded and Valiance, Uruguay, Windigo, and Sprout have qualified for the LAN finals in Osnabrück, Germany.

The regular season of the United Masters League has concluded and four teams have qualified for the LAN finals in Osnabrück, Germany. Read on as we break down all of the teams in the competition.

The United Masters League is a newly formed online league similar to the likes ESL Pro League and ECS. The difference is that the league features teams from the lower echelons of professional Counter-Strike. Fourteen teams have competed in the online season, four of whom have now qualified for the LAN final which will take place in Osnabrück, Germany. The four teams that have qualified are the following; Valiance, Red Reserve (now Uruguay), Windigo and Sprout. The format is pretty straight forward, as the teams will play through a single-elimination, best-of-three bracket and the winner will take home $50,000.

The tournament kicks off March 30 and will conclude March 31. 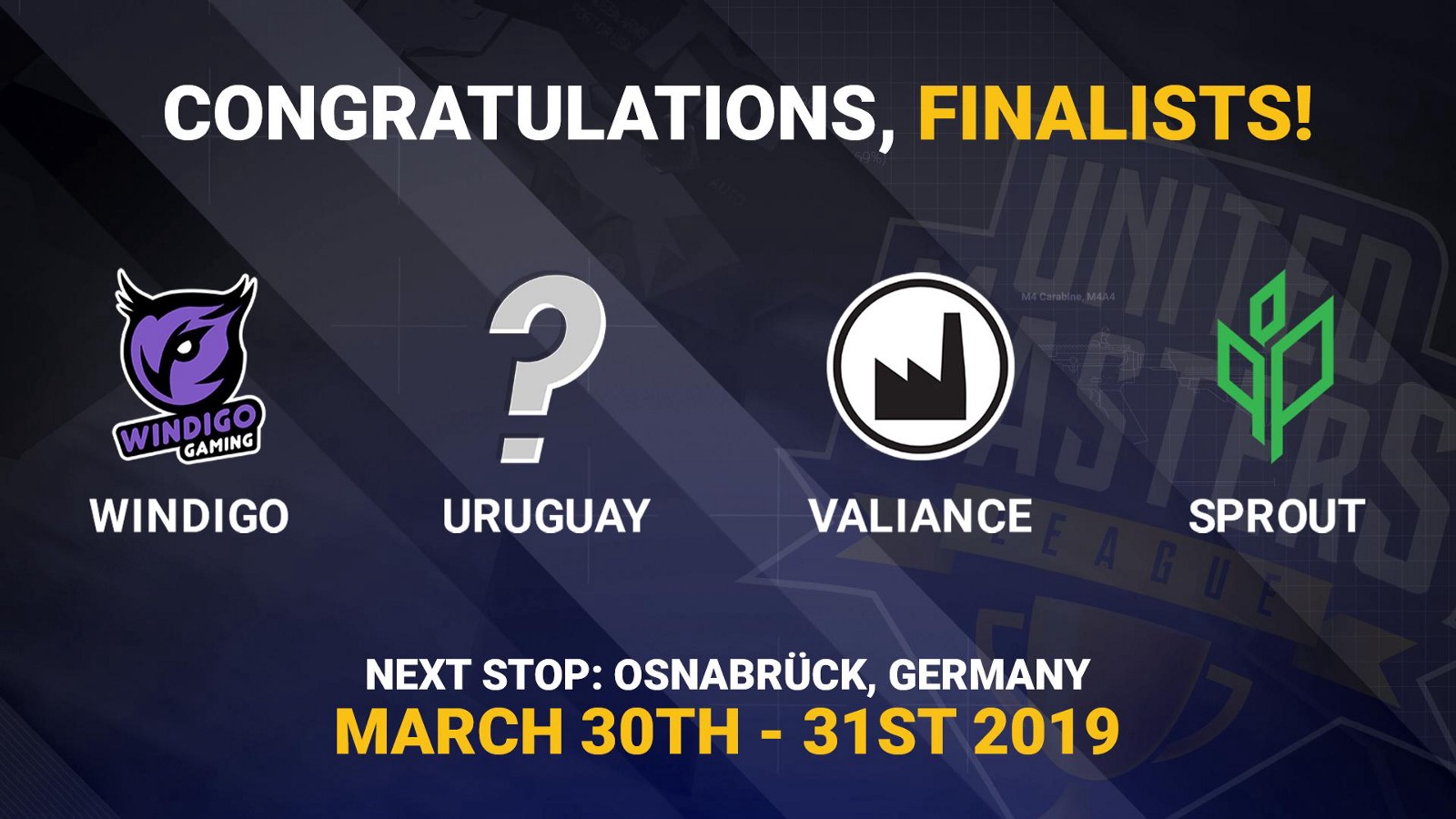 Windigo, Uruguay, Valiance and Sprout are the finalists at UML.

One of the favorites for the title will definitely be Valiance. They finished in first place in the regular season standings, four points clear of Sprout and Windigo. The team is built around the core of Rokas ‘EspiranTo’ Milasauskas and Nemanja ‘nexa’ Isaković, both of whom won titles together under the banner of Imperial at Dreamhack Open Summer 2018 and Copenhagen Games 2018. They have since strengthened their roster by picking up Nemanja ‘huNter’ Kovač and Otto ‘ottoNd’ Sihvo. The former is perhaps most known to be the cousin of Nikola ‘NiKo’ Kovač of FaZe, but he has shown that the skills run in the family as he has been brilliant for Valiance thus far alongside ottoNd. In recent months, rumors have started to circulate around a move to one of the top-teams for huNter, but for now, he remains in Valiance.

The teams most recent outing was at the European Minor, where they took down pre-tournament favorite mousesports, twice. They also put up a good fight versus the likes of ENCE and Vitality, taking both teams to decider maps. ENCE went on to make a miraculous run all the way to the major finals, and Vitality had a decent showing as well, qualifying to the legends stage and just narrowly missing out on the playoffs. Valiance is a team that packs a lot of punch in terms of overall firepower, and the likes of EspiranTo and nexa have already won titles in tournaments of this caliber despite their tender age. As such, they should have a great chance of winning the LAN finals in Germany.

Valiance will be facing competition from Sprout. The Germans have recently made changes to their lineup, opting to let go of the two Danes Niels-Christian ‘NaToSaphiX’ Sillassen and Martin ‘PERCY’ Wessel, in favor of an all-German roster. In comes Florian ‘syrsoN’ Rische, formerly of ALTERNATE aTTaX and Sabit ‘mirbit’ Coktasar, formerly of EURONICS. Sprout went on a good run of form in the league immediately after making the changes, as they went on a ten map win streak. A bit of a honeymoon period perhaps, as they have since struggled for consistency. Something that will favor the Germans will be the fact that they have a ton of experience on their side, as Denis ‘denis’ Howell and Timo ‘Spiidi’ Richter have both played on stages far bigger during their time on mousesports. A player to look out for will be Josef ‘faveN’ Baumann, who has looked great since joining Sprout back in September of last year. The Germans may be outmatched by the other teams in terms of overall firepower, but they have proven to be a solid team that plays more as a unit rather than relying on the performance of certain individuals. A statistic that helps support this claim is that they led all teams in the league in flash assists at 0.26 assists per round, compared to the likes of Red Reserve and Valiance who were at the bottom at 0.18 and 0.20 assists per round respectively.

The Bulgarians in Windigo are coming off a win at WESG in China and they will be going up against Sprout in the first round of the playoffs in a match that is completely up for the taking as both of these teams have been quite evenly matched throughout the season. Windigo, much like Sprout, is a team that features a mixture of seasoned veterans and young talents. Viktor ‘v1c7oR’ Dyankov and Kamen ‘bubble’ Kostadinov have been playing together dating back as far as 2014 on teams such as E-Frag and Rogue. Unlike Sprout, Windigo rely quite heavily on the fragging power of their young trio consisting of Georgi ‘SHiPZ’ Grigorov, Valentin ‘poizon’ Vasilev and Yanko ‘blocker’ Panov, and they will need them to be at their best if they are to hoist the trophy in Germany. Windigo competed in the far more competitive ESL Pro League last season, proving that they are no pushovers as they finished in a respectable eighth place, above the likes of FaZe, NiP and fnatic. The Bulgarians should not be underestimated as they have a lot of skill on their side, and if the likes of SHiPZ and poizon perform to their potential, they definitely have enough upside to win an event of this caliber.

Lastly, the side of Uruguay will set to take the stage with their new lineup. The team which was previously known as Red Reserve has had a chaotic season, as the organization seized operations earlier this year. As a result, they’ve dropped multiple players from their roster and have had to play with several stand-ins. Throughout the season, they have played with twelve (!) different players but have still managed to qualify for the finals. The new roster most notably features the Belgian aimer Adil ‘ScreaM’ Benrlitom who used to compete at the highest level for teams such as G2, EnVyUs and Titan. Leading the team will be Kévin ‘Ex6TenZ’ Droolans, most known for his time on teams such as Titan and VeryGames in the early days of CS:GO. Joining them will be Hampus ‘hampus’ Poser and Kevin ‘HS’ Tarn, two players who might not be as familiar to most viewers as the three previously mentioned names. HS is perhaps most known for his time on PENTA together with Miikka ‘suNny’ Kemppi, as well as his brief stay on the international OpTic team that featured players such as Emil ‘Magisk’ Reif and Aleksi ‘allu’ Jalli. hampus has spent most of his career in the Swedish scene on teams such as GODSENT and Red Reserve, and he is someone who has frequently been brought up as a potential pickup for the Swedish top-teams; NiP and fnatic.

Uruguay are now facing another setback as one of their top-performers William ‘draken’ Sundin has left the team for NiP. It is still unknown who will be traveling with them as their fifth, but it is leaning towards it being Denis ‘grux’ Gutaj or Tim ‘nawwk’ Jonasson, two young talents who have been standing in for Uruguay in the past.

Uruguay is a team that bolsters some impressive firepower, but they will likely be coming in as a big underdog due to how unstable the team has been in recent months. They will rely heavily on the performance of ScreaM and it is hard to see them going all the way considering the loss of draken and the lack of preparation. One thing that speaks in their favor is that they will not be as punished as they would be against more experienced and fundamentally sound teams. If they could make these matches into a brawl it is not out of the question to see them make it close against Valiance in the opener, but it would be shocking to see them go all the way in Germany.

Valiance should have the highest chance of taking this down and my money would be on them to win it. The fact that they have the easier first-round matchup is really what it comes down to. However, upsets are far more likely at this level of competition and as such, all of the teams are in play here. If you like yourself an underdog, there might be an opportunity to make money as all of these teams have taken maps off each other throughout the season. Windigo have proven that they are a force to be reckoned with after their win at WESG and their odds have shortened substantially as a result of this. Sprout will have the advantage of being able to study Windigo in China, and they won’t have any travel fatigue to speak of as this will be their first LAN tournament of the year, not to mention the fact that the tournament takes place on home soil. I would personally favor Windigo due to the potential upside with players such as poizon and SHiPZ on the roster, but these factors make the matchup a lot closer. Early signs are also pointing towards Uruguay being substantial underdogs against Valiance in the opener. Although Valiance deserves to be favorites in this matchup, Uruguay has enough skill to potentially take Valiance to deep waters — so it might be worth taking the round handicap in that matchup if the odds are favorable.