preview
Disneyland Major- The makings of a Fairy-tale

As we draw ever closer to The International, teams are hoping to pull out big wins at the final two majors to secure their spot to the premier Dota 2 tournament.

The Disneyland major is the fourth major of the current DPC season. It will be held at the Disney events Arena, located in Disneyland Paris. The first eSport event held at a Disneyland since 2010.

Like the other majors of the season, Disneyland will offer teams their share of $1,000,000 and 15,000 DPC points. The distribution of rewarded DPC remains very top heavy, a 1st place finish at the major would sit 5th on the current DPC ladder. This makes the remaining opportunities to earn points invaluable for teams looking to secure a trip to The International.

The format follows what we have seen at previous majors for the most part. The Group stage starts on the 4th of May at 6pm AEST. It follows GSL Bo3 formatting, with the top 2 from each group advancing to the upper bracket.

Playoffs are from the 6th of May 6pm AEST to the 12th. Its played in a double elimination format with Upper Bracket/Lower Bracket starting positions being determined by the groups. All games are Bo3 except the 1st round of the lower bracker which is Bo1 and the grand final that’s Bo5. 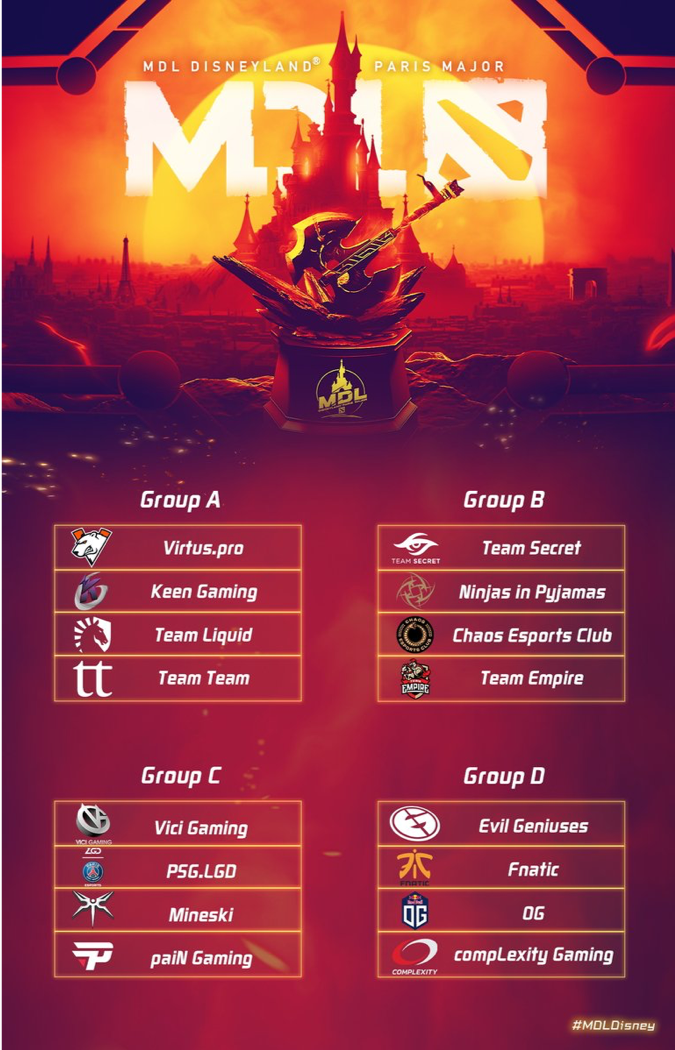 The groups for MDL Disneyland

Groups have been seeded by their DPC points. This long-term measurement is bad at predicting short term performances. NIP has been over valued significantly and liquid undervalued which has caused some lopsided groups:

It’s no secret that Team Secret are the current scene leaders. Posting some of the most consistently dominant performances we’ve seen internationally for quite some time. This doesn’t mean that they’re infallible and have been continually thwarted by a back and forth with VP. They’re still my favourite coming in for their strategic mastery of the current patches and their consistency in past competitions.

After their odd performance at MDL Macau, VP have once again show why you don’t mess with a bear. They had an outstanding run in the lower brackets, finishing 2nd at the Dreamleague 11 major. While they haven’t looked as dominant as Secret, they have posted better results at majors and are currently number 1 on the DPC rankings. If past results are any indication, expect a top 3 finish from the Russians.

NA’s finest once again come to bleed blue. The weak placing in Dreamleague could be due to a loaded lower bracket and doesn’t tell us much. Much like the other top tier teams, their lack of participation in local competitions means we can only go off their position in the global field. EG should remain top 5 coming into the event, but their weak performances against the likes of Secret, Liquid, their back and forth with VP, means there’s a fair chance they meet a road block before the finals. They have been criticised for their static and uninspired strategies, and EG will have to have a major shakeup to compete with the increased competition in the scene.

LGD is China’s tier 1. Coming in a close 2nd place at TI8, LGD has continued to impress, hovering around 4th-6th at every major. After the Chongqing Major, Somnus took a break and concerns came out whether LGD would still be able to hold their spot. While they came 5th-6th at the Dreamleague major, the games they won to get there were against far inferior teams and didn’t yield confidence. With the Disneyland major approaching, LGD have announced Somnus’s return after his indefinite break. Much like OG, whether his return will bring back the form that saw them as the strongest team coming into the 2018/19 DPC season is yet to be seen.

SEAs Tier 1 team has not disappointed this season, stringing together consistent performances internationally. Fnatic has been able to handily beat other scene leaders. Their 3rd place finish at Dreamleague and 5th-6th at the Chongqing major put them at 5th on the DPC ladder. While they have been in the lead group of teams, they’re yet to come away with a win and really show that they’re the best. I’d expect them to once again finish mid-high while knocking some of the other favourites down a peg.

Liquid are in an odd position. After failing to qualify for the first major, they have posted very weak results at the last two. This puts them barely in TI9 invitations at 12th position. Liquid has been leading the main pack for some time and continue to beat anybody who isn’t Secret time and time again. While they still beat the best, consistency has become an issue. With a 1st round exit at Dreamleague major and all series in the qualifiers for Disneyland being 2-1’s against some lesser quality teams, Liquid must prove they can go the distance once again.

VG didn’t have many results this season until the last major where they white washed the minor and continued to win the Major, completely shattering expectations. Yet I don’t feel like they’re a favourite coming in. They showed us the strength of the Chinese scene. But their results coming into this event are nothing special and you don’t become an international mainstay from one run. I’d put them in the same tier as Keen, well above other regions tier 2-3 teams, but they might not be able to consistently beat the big dogs.

Keen as a team never really posted any significant results until the addition of ‘Kaka’ and two loaned players from EHOME. Since then Keen have struck back, finishing 2nd at the Bucharest Minor, 2nd at WESG, and qualifying for all major events in the tough Chinese scene. The last major really confirmed their strength, as they ended up finishing 5th-6th and beating both EG and Liquid. Their dominance at ESL One Mumbai has established them as well above the other regions tier 2-3 teams. I have high expectations for Keen and would pin them for a mid to high place finish.

After winning The International 8, OG fell ill with a severe case of the winner’s curse. The performance drop can be attributed to the loss of ‘Ana’, who spearheaded their playstyle. After not making it to a major in the current season, OG is once again on the international stage after the return of Ana, reforming the TI8 winning squad. Since his return they’ve had a decent performances in the Disneyland qualifiers, going down to liquid 1-2 and looking more succinct in their playstyle. I’m optimistic for their recovery as a team, but only time will tell if they can retake their position on the podium.

After winning the Dota PIT minor, NiP have taken the last spot in the major. NiP are in an odd spot, not really holding a stable position in the European scene. After high expectations coming into the DPC season, NiP have fallen out of the pack. Recent results show an inability to consistently beat any tier 1-2 teams. While this wasn’t an issue in the minor, the major is full of these types of teams and I don’t know if NiP can win enough games to progress through the event.

The SA scene has looked weak, with no significant global performances to indicate the region has a strong matchup with the rest of the world. Chaos’s last major performances include a joint last at Kuala Lumpar, 9th -12th at the Chongqing, and another 9th -12th at Dreamleague. While I’m normally optimistic for Chaos in global competition, it’s difficult with their resent results. Chaos has taken the typical scene leader approach of forgoing local competition for the bigger international fish. They’ve played in only 3 tournament this year with their best placing being 8th. Team can take games off stronger teams, but lack the endurance and consistency required to beat them in series.

An old name in the scene that has been absent internationally for some time. A team that once used to compete with VP, Empire lost a lot of core players to poaching from larger teams. The beginning of the year saw the departure of ‘Miposhka’ who had captained the team for almost 3 years. This saw the team reform around less know CIS players. This has yielded promising results consistently beating weaker CIS teams. When playing against more experienced European teams they’ve had fewer comprehensive results, constantly falling to NiP and having mixed results against teams like Alliance. Against the stronger and more consistent teams in the major, it will be interesting to watch how the young squad performs. Until we see this however, we can only expect middle to back of the pack results.

I’ve talked before about my lack of faith in CompLexity and their inability to properly compete at any sort of premier international event before. Their appearance in Disneyland is more down to external factors in the North American Scene then their own internal performance. They got blitzed at ESL One Mumbai against teams that didn’t even manage to qualify for Disneyland. The only thing that could save them is if the recent dropping of ‘Deth’ for ‘Monkey-forever’ 2 weeks ago has any positive impact. They haven’t played a game as their new squad, so its impossible to predict the effect of this change.

The North American scene is currently undergoing some changes with Forwards Gaming and J.Storm no longer getting free rides to majors. TT who have recently rebranded to Beastcoast, have had mixed results coming in. While they managed a strong run to qualify for the Disneyland major, they failed to qualify for ESL Birmingham and had a weak playoff run at Mumbai. Along with this they have controversially gutted their team right before the major, leaving doubt around their ability to perform. I don’t really have high expectations for the team, but you never know what EE’s capable of.

The original paiN roster was signed by Chaos esports club. This new iteration formed off the back of the Flying Penguin disband with ‘Liposa’ coming back to the SA scene. The team immediately found success in the open qualifiers and the major qualifiers dropping only 2 games, including a 2-0 against Chaos Esports. This will be the teams first outing since their signing to paiN gaming. They’re a bit of a wild card due to the young team but have had great results locally in South America.