The regular season of ECS is finished and it’s time for the eight teams that qualified to battle it out in the finals for their part of the $500,000 prize pool

Eight teams have battled through the regular season of the Esports Championship Series and will take the stage in London, England to battle it out for $500,000 and the coveted ECS trophy. Read on as we break down the format as well as all of the teams in the competition.

The regular season of ECS is finished and it’s time for the eight teams that qualified to battle it out in the finals for their part of the $500,000 prize pool.

The format for this year’s competition is unchanged from last year, as opposed to the regular season which was revamped for 2019. The eight teams have been split up in two groups of four and will play through a traditional GSL bracket with two teams from each group advancing to the playoffs. The opening matches will be best-of-one and the remainder of the matches will be best-of-three, including the playoffs and the final. 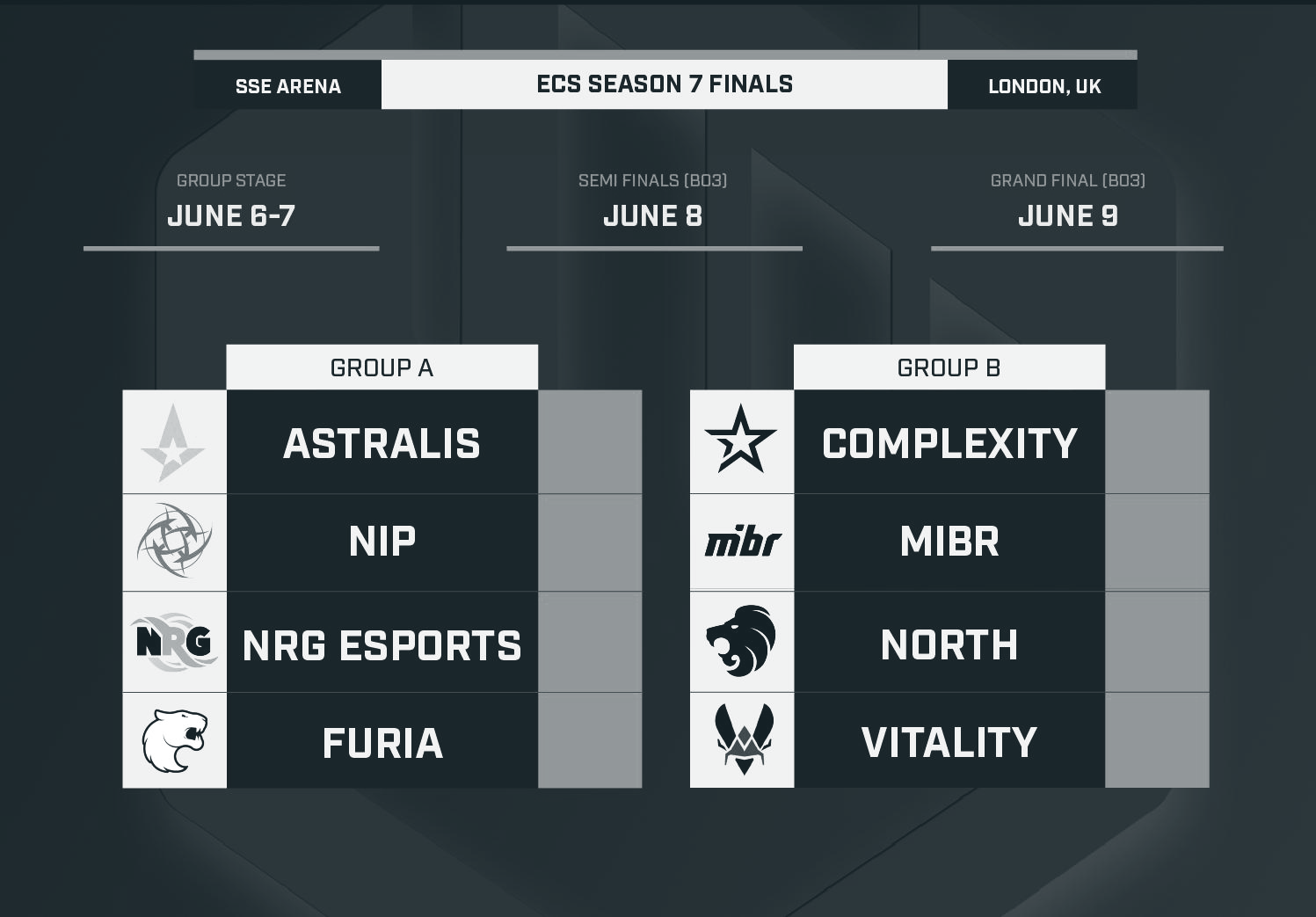 Last year’s winner, Astralis, have qualified yet again and this will be their first tournament in a month after skipping DreamHack Masters Dallas. Interestingly, the lineup of teams is quite similar to last year’s finals, as NiP, NRG, MIBR and North have all managed to qualify. The newcomers are Vitality and Furia, two teams that have been making a lot of progress as of late, as well as compLexity that replaced Rogue who withdrew from the competition.

The tournament kicks off June 6 and the winner will be crowned June 9.

All stats are LAN only against Top 30 competition in 2019 with the current rosters. coL have yet to play on LAN with their new lineup so only online results are shown.

Astralis have been rather inactive in 2019, having only played a total of five BO3 series in the last three months. Their inactivity combined with the recent success of ENCE and Liquid has pushed them down to second place in HLTV’s rankings. The team that has been hailed as the best team of all time is finally starting to show some chinks in the armor after losses in finals to the likes of ENCE and Liquid in 2019. With Astralis having received plenty of criticism from fans and pundits alike for their inactivity, the Danes will likely be highly motivated to take down yet another tournament and climb back to the number one spot in the world rankings.

NRG started the spring season by placing 3rd-4th at StarSeries i-League Season 7 as well as IEM Sydney. They followed that up with yet another 3rd-4th finish at cs_summit 4. The North American team has in some ways become notorious for their inability to get over the hump as they continuously manage to get past tough group stages only to drop the ball in semi-finals in particular. The North American side will be making the trip over to London from Dallas on short notice like many of the other teams in the competition, where they were unable to make it past groups for once after dropping games to G2 and Furia.

NiP were severely hampered at their most recent showing at DreamHack Masters Dallas where they were forced to play with their coach, pita, due to travel complications. They managed to beat the Chinese team TyLoo in the opener but it was all downhill from there as they got dismantled by FaZe and Vitality. The ninjas have yet to win a trophy in a top tier tournament with the current lineup — a lineup that has been together for almost a year now. With almost a year of mediocre results, it begs to question if this current lineup has run its course. NiP will hope to prove that is not the case as they return to the tournament that they had a decent showing at last year where they topped their group before losing out to Astralis in a three map series.

Vitality picked up a win at cs_summit 4 earlier in the month before heading over to DreamHack Masters Dallas where they had to settle for a quarter-finals exit after losing out to a team that was highlighted in the betting segment of the previous article; The Brazilian side, Furia. With ZywOo leading the charge, Vitality are looking solid and they will hope to continue their upswing with another good showing in London.

North will be making their second LAN appearance with valde under the helm. The Danish superstar picked up the in-game leader role after cadiaN was dropped from the team earlier in the year in favor of the AWPer, JUGi. Their debut as a team came at DreamHack Masters Dallas where they started off strong with a win against Vitality. However, they were unable to best Team Liquid and Vitality in BO3s later in the tournament which saw them go out in 7–8th place. There has always been a lot of skill on the North roster, but they have been unable to convert that skill into wins on the biggest stage. At the ECS finals, we should get a better idea about how well North will be able to do with their new lineup.

Furia are coming off a deep run at DreamHack Masters Dallas, where they went all the way to the semi-finals after beating fnatic, NRG and Vitality. I highlighted Furia in my betting preview segment for the event as they have been showing signs of improvement lately. They have a ton of skill on their roster with players like yuurih and KSCERATO in particular and they have shown that they are willing to take some risks by incorporating the new map, Vertigo, into their map pool — something which gives them a bit of an edge in the map veto. FURIA will have to punch above their weight yet again as they have been put in the tougher of the two groups, in my opinion. However, they definitely should not be underestimated and with NiP and NRG struggling at DreamHack Masters, it is not out of the question to see the Brazilians make another playoffs appearance.

MIBR will be one of few teams in this competition that will come well rested and well prepared, as they were not in attendance at DreamHack Masters Dallas earlier in the week. The Brazilians reunited with felps and TACO at the start of the year, two players whom they were successful with back in 2017. They started off in fine form by making the semi-finals of the Katowice Major, however, since then they have had a rough go of things with several early exits in tournaments. The reunion certainly hasn’t been a success so far, but it needs to be said that their schedule has been incredibly taxing, with plenty of tournaments in Asia, North America and Europe in a short amount of time. They have now finally had some rest which could prove beneficial as they hope to improve on their 2nd place finish at last year’s ECS finals.

compLexity will be making their first LAN appearance with SicK whom they acquired from Rogue in March, as well as oBo who was picked up from free agency this week. The roster is not the only thing that has been revamped, as the team logo has also been changed to align with compLexity’s partnership with the NFL team, Dallas Cowboys. The North American side will be the big underdog of the competition, but they proved at the Katowice Major that they are capable of upsets. However, much of their success at the major came off the back of in-game leader and lurker, stanislaw, who has now left the team. With the recent changes, it is hard to expect much of anything from compLexity and advancement to the playoffs seems unlikely despite having the easier group of the two.

Astralis will be coming in as the big favorite which is deserved in my opinion. Liquid and ENCE, two teams that pose the biggest threat of beating Astralis, won’t be present at the ECS finals. In addition, most of the tournament will be played using BO3s which will only benefit them as they will be able to go back to playing Inferno or Nuke, two maps where they flourish. I was hesitant to recommend betting Astralis during the recent Blast events due to the format and as things turned out it was correct as they failed to win in both Madrid and Miami. However, at this tournament, there might be some value in the outright despite the low number due to the previously mentioned factors.

As for outsiders, most of the value lies in the early BO1 matchups as opposed to the outright market in my opinion. North, compLexity and FURIA will likely be quite substantial underdogs in the opener and I think there could be some value there due to the BO1 factor.