Blast Pro Series heads to Madrid for the third tournament of the season. Six teams will battle it out hoping to accumulate points for the recently announced Global Finals. Read on as we break down all you need to know about the tournament.

Blast Pro Series will be heading to Madrid, Spain as the tournament organizer RFRSH continues to put on events all throughout the world. The format will be the same as the Blast tournaments in the past. Six teams will battle through a round-robin group stage and all of the matches will be best-of-one leading up to the final which will be a best-of-three. The winner will take home $125,000 from the $250,000 prize pool. Before the final starts, the team that finishes in third place will get to pick an opponent from the remaining teams to play in a show match for a bonus prize of $20,000. This has normally been an aim map competition where the players compete against each other with the most commonly used weapons; AK-47, M4, Deagle, CZ-75 and AWP.

What’s new for 2019 is the introduction of the Global Finals. Astralis, NaVi, FaZe, Liquid, NiP, MIBR, and Cloud9 will each play five Blast Pro Series tournaments throughout 2019 and will tally up points depending on where they place in the tournaments. The top four teams at the end of the season will battle it out in the global finals for the first place prize of $350,000. The team that finishes in first place at the end of the season will play the fourth-place team, whereas the teams finishing in second and third will play each other for the last spot in the final. Contrary to regular Blast Pro Series events, all of the matches in the global finals will be best-of-three.

The points will be handed out as follows:

The year kicked off with Blast Pro Series Saõ Paulo, where Astralis took down Team Liquid in the final. Team Liquid would get another shot at the title in Miami but came up short once again as surprise finalist FaZe hoisted the trophy. With two events in, the standings are as follows: 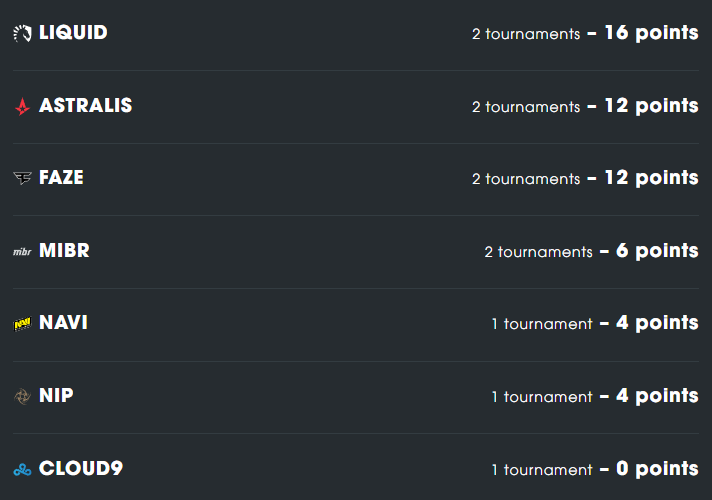 Astralis are finally starting to show some signs of weakness after months of dominance as they dropped maps to FaZe, Liquid and MIBR at Blast Pro Series Miami. However, this was something I hinted could happen in my preview for the event. The Blast Pro Series tournaments allow for upsets since the entirety of the group stage is BO1. This also allows teams to avoid playing Astralis on their two best maps; Nuke and Inferno. This is exactly what ended up happening, as Astralis lost on Dust 2 and Overpass. It is also worth noting that Astralis’ unbeaten streak on Inferno has finally come to an end after losing to BIG in ESL Pro League. With that said, Astralis will still be the overwhelming favorite and as long as they can get past the group stage, they should be in prime position to claim their fourth Blast Pro Series title.

Just like Astralis, Natus Vincere had a bit of an off tournament at Blast Pro Series Miami, finishing in fourth place with losses to FaZe, Liquid and Astralis. Prior to that event, they took down StarSeries i-League Season 7 in dominant fashion, a win that came off the back of brilliant individual performances from s1mple and electronic in particular. You would be hard pressed to find a stronger duo in CS:GO and if they play as they did at StarSeries, NaVi will likely find themselves in another final. It is also worth noting that the competition will be a lot weaker than what we saw in Miami. Team Liquid, a team that NaVi have struggled against historically, will not be present in Madrid — which makes NaVi a prime favorite to make the final alongside Astralis.

Fan favorites ENCE will be making their second Blast Pro Series appearance after attending Blast Pro Series Saõ Paulo a couple of months ago. A tournament in which they just barely lost out on a spot in the final after drawing to Team Liquid in the last match of the group stage. The Finns shocked the world by making the major final in Katowice earlier this year with wins against the likes of NaVi and Liquid. They have since proven that their major run wasn’t a fluke with solid showings at the aforementioned Blast Pro Series Saõ Paulo as well as StarSeries i-League where they made the playoffs but were ultimately bested by the eventual champions NaVi in a three map series. The Finns will get an immediate rematch against NaVi as they will be going up against them in the first match in Madrid. The two teams are tied in maps at three apiece so it really is anyone’s game. A very important match in many ways, as whoever wins will be in an excellent spot for the remainder of the group stage.

Next up is the Swedish team, NiP. The Ninjas have been an uninspiring team since this lineup first came together about a year ago. However, their most recent finals appearance was at a Blast event, as they finished second to NaVi at Blast Pro Series Copenhagen in 2018. I believe there’s a reason for this, as the Swedes are quite proficient in BO1s. In fact, they have beaten Astralis twice in BO1s since the lineup was formed, which gives them a tied record against the Danes with two wins apiece. As such, they are my dark horse going into this event and I wouldn’t be surprised to see them cause some upsets in the group stage.

Cloud 9 have been in complete disarray for quite some time now, as they have been forced to make multiple roster changes due to unforeseen circumstances. Despite this, I would argue that they have performed above expectation at times, as they have been competitive with teams far stronger than them on paper. Their most recent change saw flusha leave the team due to the sudden passing of his mother. In addition, kioShiMa was also let go for unknown reasons. Instead, they have chosen to pick up cajunb who was let go from OpTic, as well as vice who most recently played on Rogue. I would personally argue that this is a pretty big downgrade and with such little practice, it was unsurprising to see them go winless at Blast Pro Series Miami. Cloud9 should be able to pick up a win or two this time around, but I have a hard time seeing them make the final.

There will also be a play-in live at the event. Movistar Riders from Spain will take on Giants from Portugal to decide who gets the last spot in the tournament. The Spaniards should be the favorites, however, it is worth noting that they have just recently lost one of their best players, loWel, to HellRaisers. Movistar Riders have actually had some decent results online and if it wasn’t for the recent lineup change I would have at least given them a fighting chance against teams like Cloud 9 and NiP. At their current strength, both of these two teams will be huge underdogs so it is hard to expect much of anything from whoever makes it past the play-in stage.

Astralis should be the overwhelming favorite despite their recent missteps. The field that they will be going up against will be a lot weaker this time around which makes them my pick to win. However, I would shy away from taking them to win outright at a tournament like Blast Pro Series due to the format. I would rather bet them at shorter odds in the final if they get there. As for long shots, I like NiP either in the ‘To make the final’ market or as an outright winner for a potential hedging opportunity if they were to make it. They will definitely be big underdogs against Astralis in particular, and in that match, I would be tempted to make a handicap bet depending on the map and odds. The Swedes have gone on record multiple times saying that they like playing Astralis and their history against them in BO1s combined with the fact that Astralis are showing some signs of weakness lately definitely gives them some upset potential. Another factor to keep in mind in regards to betting is the introduction of the new map Vertigo. This map has barely been played at the highest level so there is some potential for upsets at this stage since very few teams have truly incorporated this map into their map pool.